The conservative movement in America seems to have fallen on hard times. Even though conservative talk radio is at its height, and President Obama had to shift to the political center to win the 2008 election (only to disappoint months after his inauguration), conservative ideas garner little excitement or serious engagement among young people as they once did even just two decades ago. We have gone from Eric Voegelin “Don’t immanentize the eschaton” to Hannity’s “Sean, you’re a great American.” To be sure, many conservative and liberal young people have firm opinions on issues along the conservative-liberal fault line. They can opine, and fiercely so, by blog, twitter, or email on issues as wide ranging as same-sex marriage, Constitutional interpretation, abortion, free markets, and the role of religion in the public square. But very few, if any, of them seem to be aware of the intellectual patrimony from which their views sprang, and the arguments and reasons that animated the proponents of the ideas they claim to sincerely and deeply hold. “Hope” and “change,” though fine words in their own right, do not qualify as actual ideas that may guide presidents and prime ministers to excellence in statecraft.

There was a time when many students in college or graduate school would participate in robust discussions with friend and foe alike about the ideas and arguments plumbed from the works authored by conservative luminaries as diverse as Hayek, Strauss, Voegelin, Buckley, Weaver, Friedman, Kirk, Lewis, Chesterton, and Anscombe, to name just a few. Sadly, there is very little of this going on today in our universities and colleges.

A Second Look at First Things: A Case for Conservative Politics has two purposes. The first is to remedy this contemporary deficit by offering, in one volume, an intelligent, winsome, and readable articulation of conservative ideas on a variety of issues and questions. They range from the abstract (“Why the Natural Law Suggests a Divine Source”) to the practical (“Lincoln and the Art of Political Leadership”), and to the provocative (“Being Personal These Days: Designer Babies and the Future of Liberal Democracy”).

The second purpose is to honor the great conservative political philosopher, Hadley P. Arkes, the Edward Ney Professor of Jurisprudence and American Institutions at Amherst College. In 2010 he celebrated his 70th birthday, and 2011 marked the 25th anniversary of his classic monograph on natural law and public policy, First Things: An Inquiry Into the First Principles of Morals and Justice (Princeton University Press, 1986). So, in celebration of these milestones, the editors have chosen to produce a work that is consistent with Hadley’s vocation as an exceptional teacher of young people. Although most of those who have read Hadley’s books and articles think of him as an engaging and productive scholar, which indeed he is, his students – including both those at Amherst as well as those who have had the privilege to hear his spell-binding lectures elsewhere – know him as an outstanding teacher. His ability to unpack a principle of jurisprudence by weaving together an analytical argument with an enthralling tale or insightful anecdote is truly magical to behold. 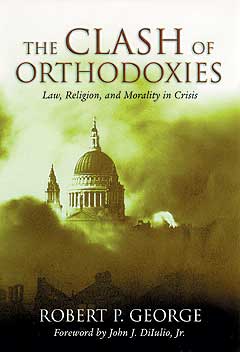 The Clash of Orthodoxies: Law, Religion, and Morality in Crisis

It is a common supposition among many of our cultural elites that a constitutional “wall of separation” between church and state precludes religious believers from bringing their beliefs to bear on public matters. This is because secular liberals typically assume that their own positions on morally charged issues of public policy are the fruit of […] 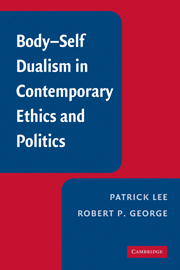